The Very Small Aperature Terminal (VSAT) Satellite Communications System is a joint project between scientific and technical personnel at CICESE, SCIGN, the UNAVCO Boulder Facility, and Nanometrics. This project is motivated by the need for a robust, cost effective, and low power data communications solution to transfer GPS data from remote sites where no other communication alternatives exist. In addition, there is a general push towards reducing the latency in GPS data used to produce GPS data products (e.g. orbits and clocks) and to support upcoming LEO missions requiring low latency, 1 second GPS data. Criteria for a successful demonstration is to provide less than 5 second latency between GPS data acquisition and delivery to a processing facility. The data will be telemetered to the UNAVCO Boulder Facility via a Nanometrics 3.8m Ku-band antenna located at the central data acquisition hub and a low power (>20 W) 1.8m antenna located at remote sites. 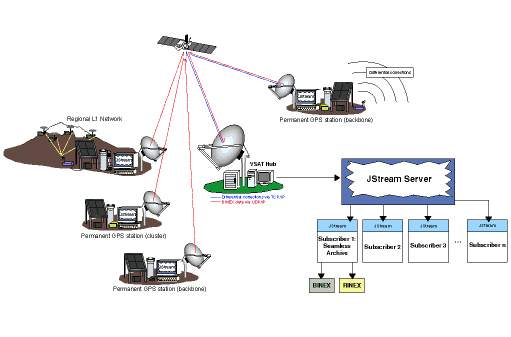 Figure 1 VSAT network consisting of a Ku- band central hub and processing facility in Boulder. At the remote site, the Jstream java application would be used to convert the stream to BINEX before transmitting the data to a central hub. At the hub, Jstream would be run again to allow for distribution to multiple users. A VSAT system used in conjunction with Jstream achieves a data transmission and distribution capability in remote places where traditional technologies fail.

Each station in the network (hub and remotes) is assigned a TDMA (Time Delay Multipoint Access) slot and transmits data only when authorized. At each remote site, an Ashtech Z12 receiver streams raw GPS observables every second to the remote VSAT terminal. The data are transmitted to the central hub using UDP/IP protocol and a header (NMXP) containing a unique sequence number. When data are received at the hub, the sequence numbers are checked for continuity, and if data are missing, a retransmission request is automatically sent from the hub to the remote.

At the end of each day, raw GPS data are extracted out of the central processing facility ring buffers and quality checked and converted to RINEX using teqc. During the conversion to RINEX, the data are decimated to 15 second epoch intervals.

The UNAVCO Boulder Facility installed and tested a low-power, Ku-band VSAT terminal for transmitting GPS data from remote GPS receivers to a processing facility. Tests results indicate continuous, 1 second GPS data can be streamed from stations within the VSAT footprint, quality checked, and delivered for processing with a 2.5 sec latency and a 99.8% reliability. We intend to integrate VSAT remote terminals with other communications technologies. For example, a dense array of GPS receivers, strain and tilt sensors could continuously broadcast data from TDMA radio modems to a central VSAT terminal which could rebroadcast the data to the user.