UNAVCO can assist with GNSS and other station reconnaissance as needed. The following issues are considered during GNSS site selection. 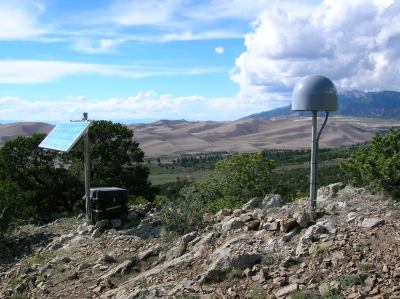 A clear view of the sky with no obstructions above an inclination angle of 10-15 degrees is ideal. A station obstruction diagram should be sketched or pictures taken to identify the approximate distance and bearing to the nearest obstacles.

Tall, dense trees and foliage near the site can contribute to intermittent signal loss, just as buildings do. Be aware of the impact of seasonal foliage when reconnaissance is conducted during the cold or dry season. If small trees are present but do not block the sky appreciably, assess their rate of growth if the station is to be occupied for several years.

Flat surfaces (vertical or horizontal) near the antenna can cause serious multipath interference. As a rule of thumb, a one-story building should be at least 50 feet away while taller buildings need to be farther away.

Potential sources of radio interference include high-power television or microwave transmission towers. Ideally, the site should be kept at least 1 km away from such structures.

Weather conditions are not normally a factor for permanent site selection since automation is a primary goal and maintenance visits can be arranged during periods of good weather. The local climate will mainly dictate the choice of equipment installed at the site; for instance, in a cold climate, snow accumulation on the antenna may become a factor, and an antenna radome should be considered.

During the initial visit to the proposed site, try to collect data for at least 24 hours (preferably 48 hours) to assess the quality of the site.

If the data are to be telemetered, consider the requirements for your chosen mode of communication. If using a cell modem, is there cell service at the site? If using a radio modem, does the site have a relatively uninterrupted view to the master radio? If telemetry is critical, test out the communications equipment before committing to the site.

Consider ease of access and proper authorization from property owners. For example, permission to build a station may be granted by the owner, but access may have to be negotiated with landowners whose properties are adjacent to the site in question. Names and numbers of site contacts should be well documented.

Inquire with locals and/or police about vandalism incidents. There may be additional cost involved if a fence or other perimeter enclosure has to be built to protect the site, or if special precautions must be taken to camouflage it. Site safety and security must be considered both when selecting a site and when selecting ancillary equipment for the site. Consider human, animal, and environmental effects on the site.