In December, 2005, the L2C signal was introduced to improve the accuracy, tracking and redundancy of the GPS system for civilian users. The unencrypted L2C code can be tracked with civilian receivers without correlation. The L2C signal provides a 6-12 dB-Hz SNR improvement over L2P(Y) legacy signal, and a small improvement over L1 C/A-code, which allows for better tracking in marginal signal conditions. With the recent launches of the first block II-F satellites (SVN62/PRN25; SVN63/PRN01), there are 9 healthy satellites broadcasting L2C signals. Seven Block IIR-M satellites also broadcast the L2C signal.

The L2C signal is broadcast in quadrature (90º out of phase) with P2. For example, the two phase modulated carrier waves below (I and Q) are a cosine wave and a sine wave. The total signal or the sum of the two components is shown at the bottom. This quarternary modulation causes a quarter-cycle bias between the L2C and L2P phases. This bias is corrected by some some receivers (e.g. Ashtech, Septentrio, Trimble) and left uncorrected by others (e.g. Javad, Leica, Topcon).

How will the phase shifts affect carrier phase positioning?

GNSS network operators such as the UNAVCO Plate Boundary Observatory (PBO) have been hesitant to use the new signal as it is not well determined how tracking and logging L2C could affect the positions derived from L2 carrier phase measurements for a given receiver.  The L2C capability of receivers currently in widespread use in permanent networks can depend on firmware as well as hardware; in some cases receivers can simultaneously track L2C and L2P(Y) phases and some can track only one or the other, and the resulting observation files can depend on how individual operators configure the devices. Some data formats do not allow for both L2C and L2P phase measurements. Just because you’re tracking both L2 phases does not mean that you’re logging both!

Some known data formats that can not log both L2C and L2P phase measurements:

Just as the knowledge of GPS P1-C1 biases is a must for successful ambiguity resolution (on long baselines), coping with receiver dependent 0.25-cycle phase biases between L2P and L2C will be a must before L2C can be used in GNSS analysis software.

In cases where your RAW data contains both L2C and L2P, translation software (such as UNAVCO’s teqc) must be used carefully in order to select which L2 observation is written to RINEX and used in positioning. RINEX 2.XX currently allows for a single L2 phase and SNR observables (it does allow for multiple L2 psuedoranges). RINEX 2.13 is currently under development and will allow both phases and SNR observables.  Modifications were made to teqc in early 2010 to eliminate potential confusion in that part of the process; if L2C code observations appear in a RINEX file produced by teqc, the L2 phase and S2 SNR observations were from the L2C carrier for those satellites.

An example using teqc to translate a Trimble .T02 file into RINEX obs and nav files:

It will depend on what receivers you use and if they correct for the 1/4 cycle phase difference between L2C and L2P.

The following figure shows the difference between two TRACK analyses using (1) the L2P phase (blue) and (2) the L2C phase (red). Both receiver models corrected for the 1/4-cycle difference. 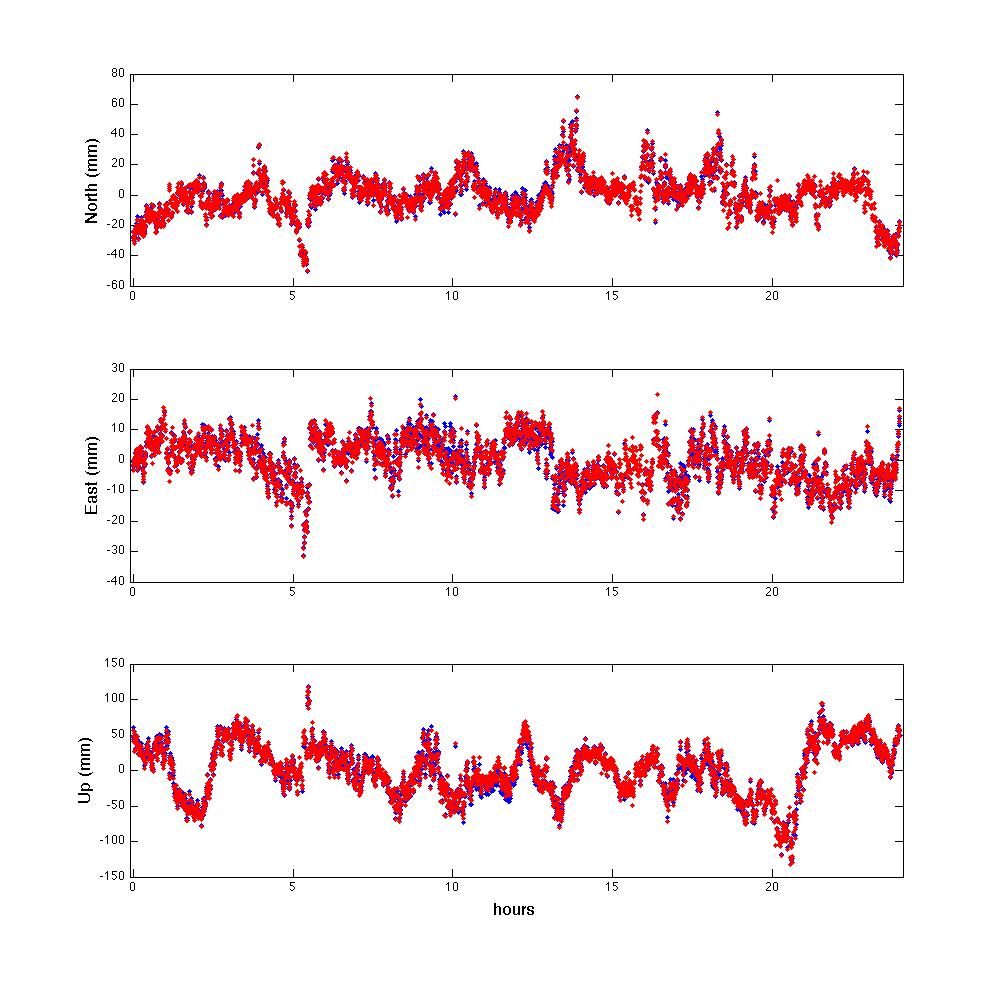 The following figure shows the difference between the L2P and L2C analyses when using one receiver that corrects for the 1/4-cycle bias and one receiver that does not. The uncorrected 1/4-phase bias in the L2C data from receiver 2 prevents TRACK from completely resolving all of the ambiguities, thereby degrading the position solution. 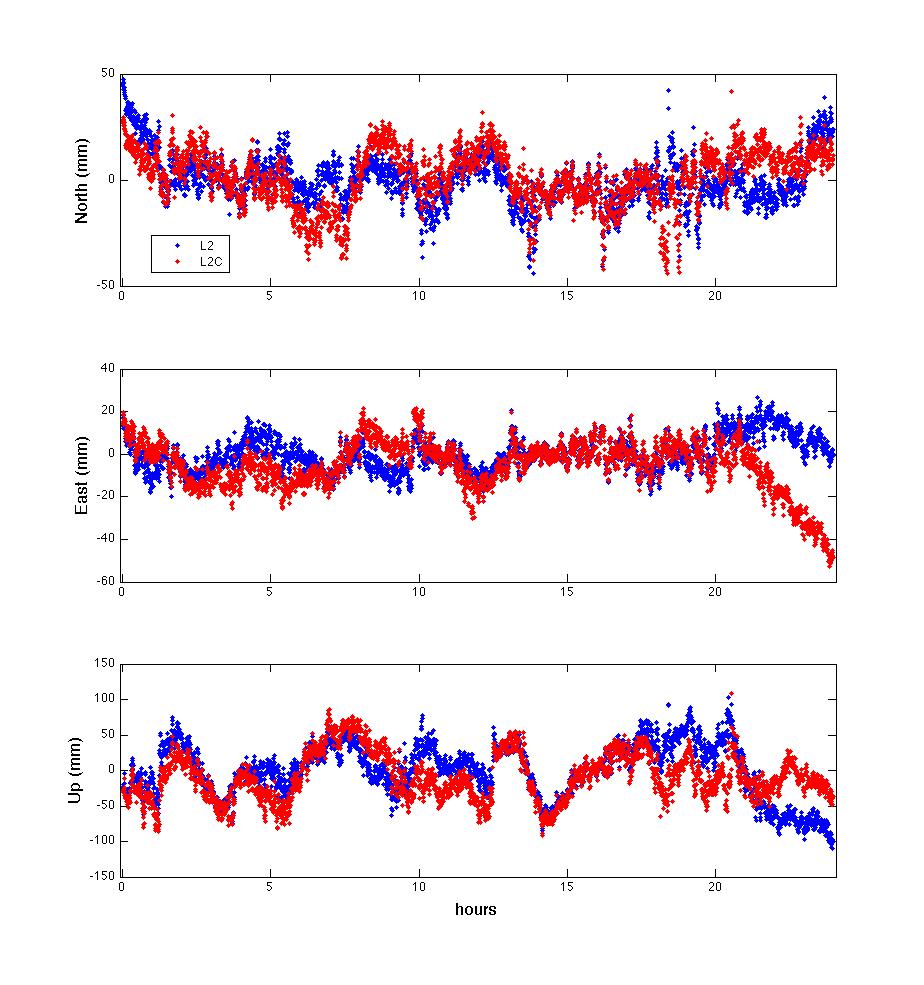 In the following example we compare two 200-day position time series from the site P030  (a linear trend was removed from each component for clarity). Tracking of both the L2P and the L2C phase observables was enabled at day 100.  P030 is equipped with a Trimble NetRS receiver which corrects for the 1/4-phase bias. The two overlapping position time series below were estimated using the L2C observables when available (green) and with the standard L2P observables only (blue). We observed sub-millimeter differences in the estimated horizontal positions and differences < ~3 mm in the vertical. 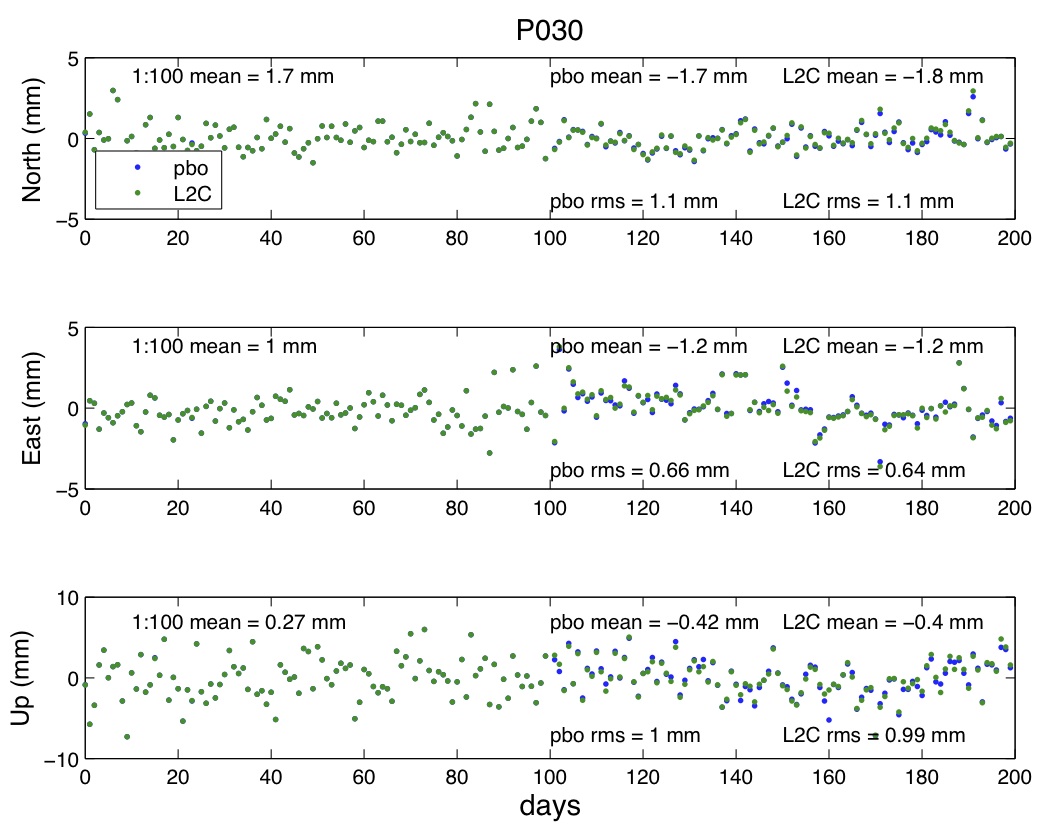 The mean differences between the position time series are < ~0.1 mm in the horizontal and < ~0.2 mm in the vertical components (shown below). 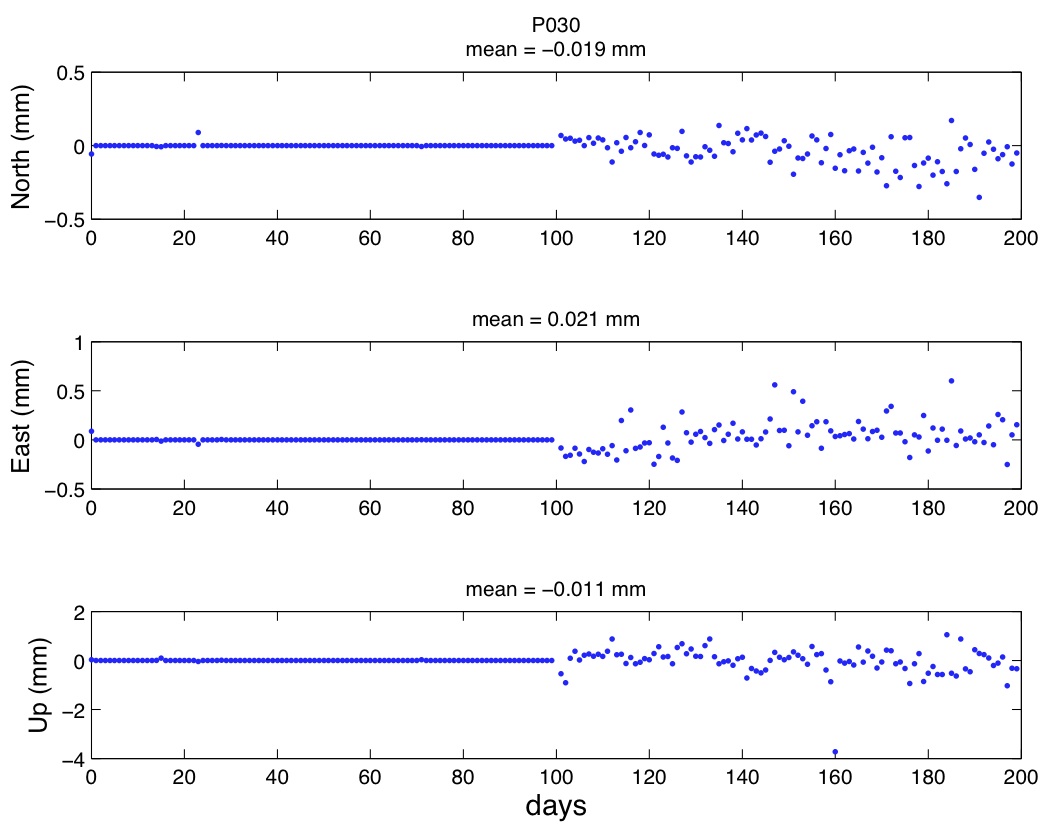 How does receiver tracking performance change when tracking L2C vs. L2P? 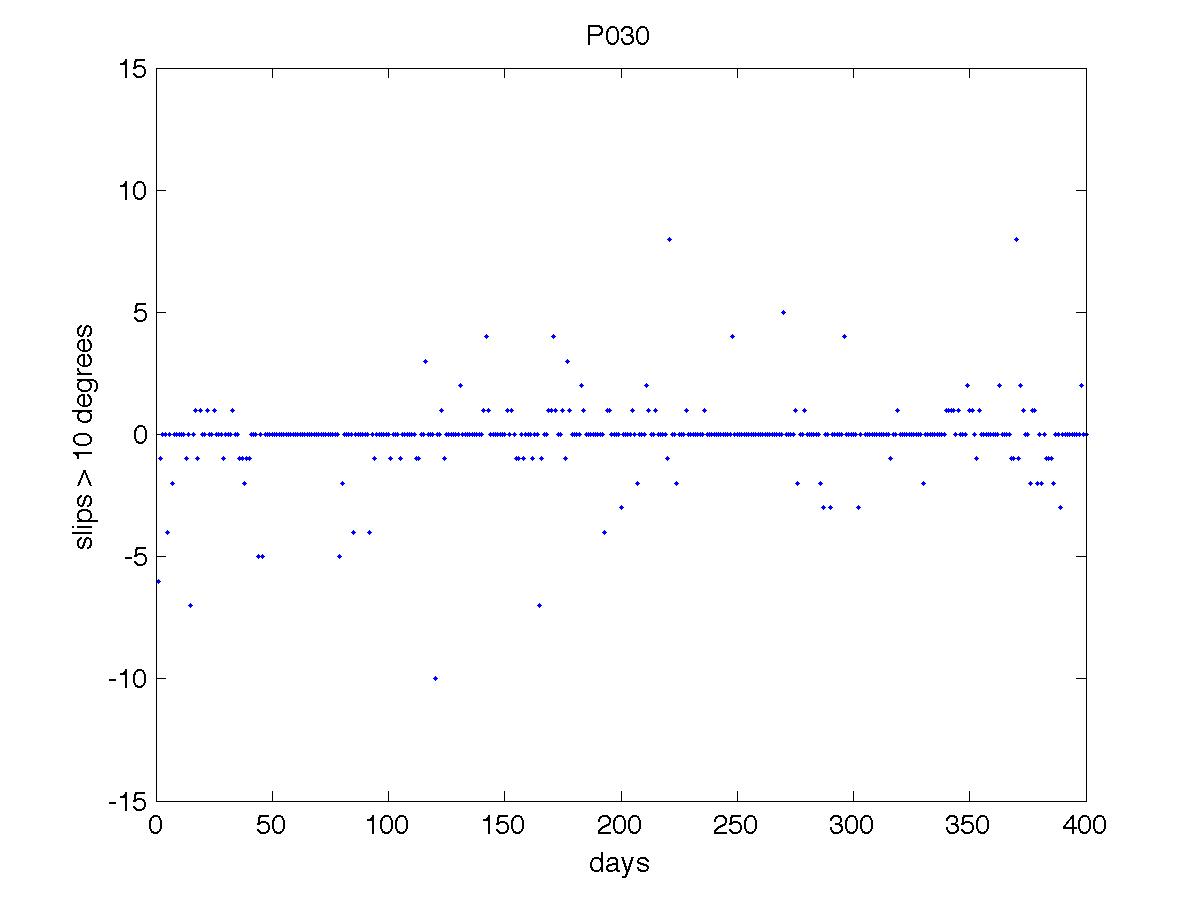 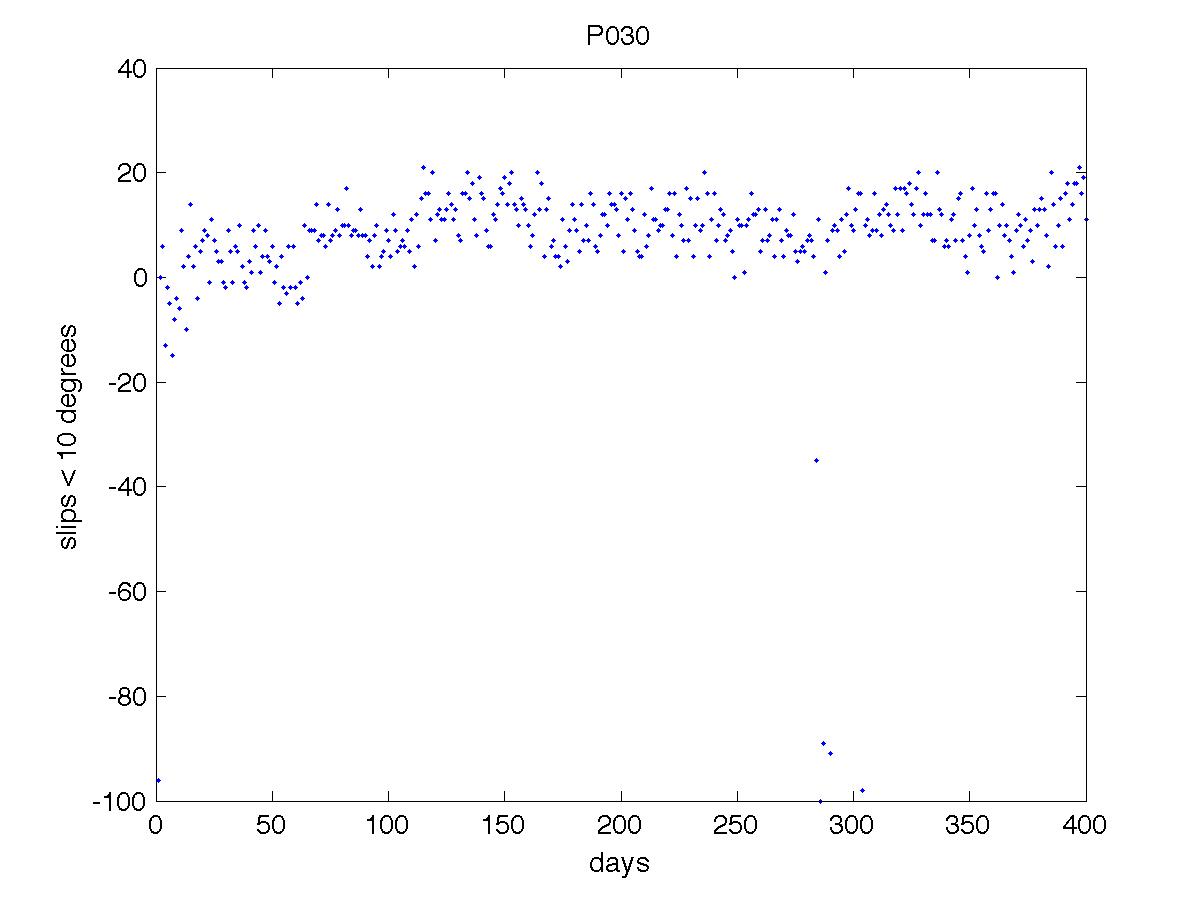 Direct comparisons of the L2 and L2C phase observables

Receivers use separate correlators or channels for each L2 carrier phase measurement. Differencing the L2 and L2C carrier phase measurements allows us to investigate the instrument’s semi-independent measurement noise and reveals the receiver’s digitizing resolution (the banding). The figure below shows the direct comparison of the L2 phase observable from two RINEX (2.11) files separately translated from the same receiver (Trimble NetRS) over the same time period. The change in cycles between each epoch for the L2 and L2C observables is differenced and plotted with respect to time (hours). We used teqc to translate the RT27 data file into two RINEX files: 1) a file that included the L2C phase observable,  2) a file that excluded the L2C phase observable. The L2 and L2C observables show sub-millicycle differences over a 24-hour mean with variations up to ~Â±0.06 cycles. 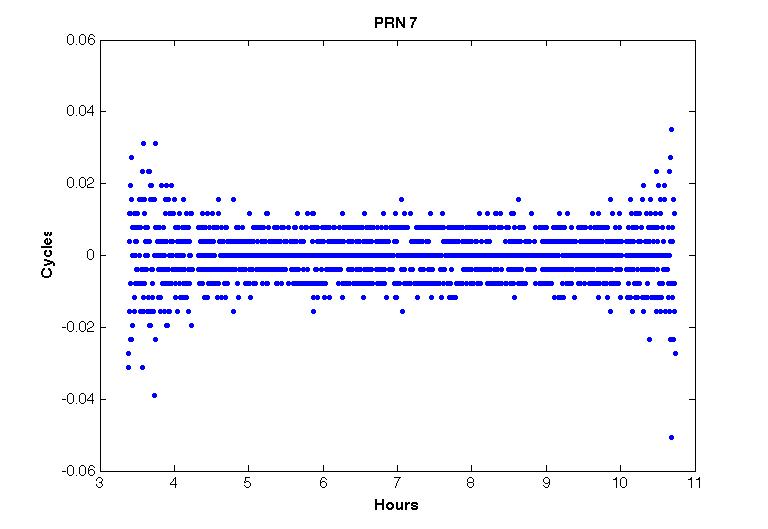 The difference between each band in the figure above is ~0.0039 (1/256) cycles. This banding demonstrates that the digitizing resolution of the NetRS receiver is 1/256 (1/2^8) of a cycle - implying that the receiver is using an 8 bit A-D conversion. The analysis above was done using a translation of RT27-format data using extended resolution on the phase values beyond the usual 0.001 cycle resolution available in RINEX observation format.